My job, and that of my partners within the Water Infrastructure Services Group at TWM, revolves around providing clean waters for our communities. But whenever I describe my job to young kids, they inevitably get the giggles when I start talking about sewage. And of course they do, because sewage stinks, and I also found it hilarious when I was their age. Coincidentally enough, TWM is constantly looking for ways to eliminate some of those odors and the underlying problems for which they are symptoms.

One of the more common reasons you’ll encounter odors within a sewer system is long detention time, either within a wet well waiting to be pumped or within a long force main. During the detention time, the available oxygen is depleted. When the wastewater from the force main is discharged at a manhole, hydrogen sulfide is released, resulting in the commonly known rotten egg smell.

There are three treatment solutions that can eliminate odors from wastewater sewer systems:

Perhaps the most straightforward option for controlling the resulting odor is the use of a scrubber/activated carbon system. If the discharge point is within a manhole, inserts are available that use activated carbon removal for odor control. In situations where we have had more space, such as at a lift station or treatment plant, we have evaluated more robust systems pulling the air out of the discharge structure and treating it through a scrubber.

While the activated carbon technologies are helpful in addressing the odor, they only address the symptom rather than the underlying issue. Our recommendation, even when installing odor prevention at the discharge point, is to treat the root cause and prevent the release of hydrogen sulfide gas. Not only does it address odors, but by preventing corrosion associated with the release of hydrogen sulfide, it lengthens the life of collection system structures.

At pump stations themselves, we have evaluated a number of chemicals to add to the wastewater, some of which act chemically and others biologically. Such chemicals include calcium nitrate, ferric chloride, and hydrogen peroxide. Each has its own sweet spot, depending upon factors such as total retention time within the force main, whereas others, such as calcium nitrate provide other benefits due to its inert qualities (and not requiring secondary containment). Other options, such as injection of nearly pure oxygen for introduction into the force main, may have much larger capital expense (as well as noise factors), but may have a lower operational cost in the long run. The oxygen can be generated on site or storage as liquid oxygen on site.

A final option that we have incorporated into some systems is the use of a vortex aeration device. Included in the discharge manhole, the device creates a slight pressure drop that causes a downward draft. This draft causes fresh air and escaping gasses to be mixed in with the sewage at discharge, in turn re-entraining the gases and oxygenation the sewage. These systems can capture the majority of the escaping gas and increase the dissolved oxygen.

When looking at solutions within systems, there is no magic bullet. We are always looking at balancing capital costs with ongoing maintenance requirements. It’s our consistent recommendation that when possible, measures be taken not only to eliminate odors but to also eliminate the source entirely.

Improving your wastewater system doesn’t have to “stink.” TWM can cost-effectively evaluate your options. We continually work with operators to assess the benefits of an odor control management program and to find the best solution that works for a particular situation. 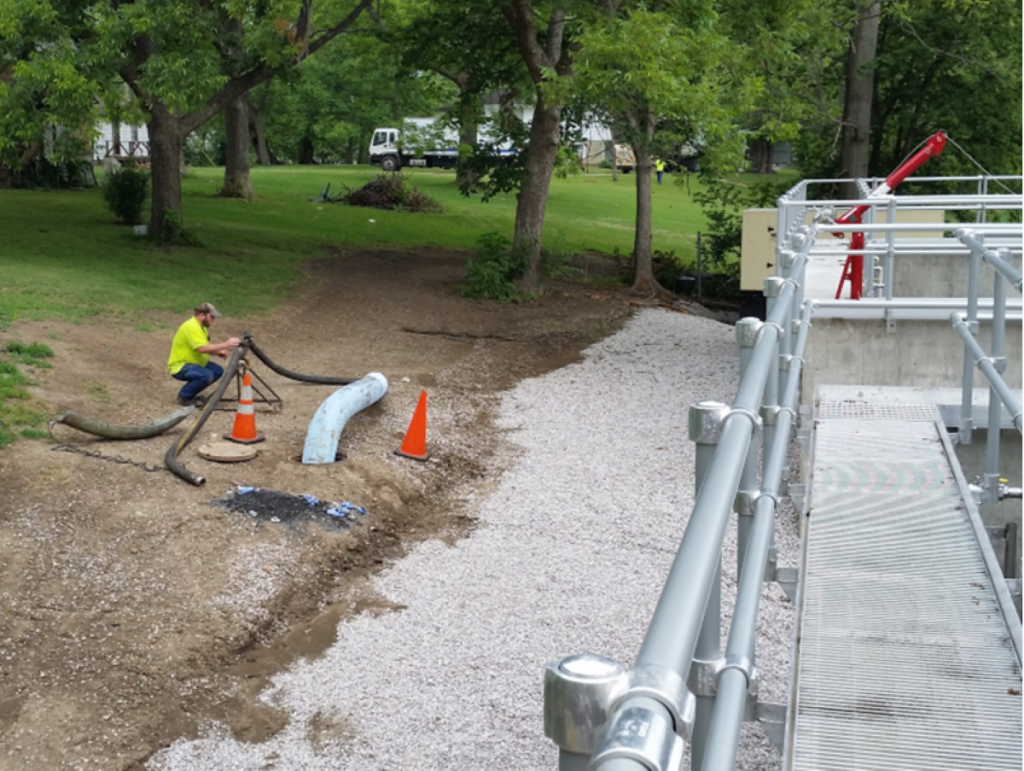